Hey all. We here at the Valor team are happy to bring you the 2nd update of the Summer. This is a pretty significant one as the main part of this update is finally bringing Trial 4. As well as a Serenity, Lances, Nodes, quiver reworks and a new Fallen Light LG consumable.

The new Wikipedia will be coming out in the next fourty eight hours. All current wiki content will be accessible at new legacy urls. We're super excited to unveil the new wiki, that has been worked on by Deathmod, Nordic, Oddish & members of our community. It takes the information style of the unofficial wiki, and puts it in a great web form. Anyone with a GitHub account may contribute, and have their changes approved, so make sure to check it out. It's still being built out, but has an insane amount of content already.

We're excited to continue to welcome new members of our team, so look out for official announcements and new faces very soon. We're also sad to announce Sweet will be retiring as their IRL gets busier and busier. We hope to have them back in the future, as they were an awesome addition to Valor.

Due to the combined efforts of Orbit & Sebafra, this update sees a lot of client improvements as well. Features such as the market UI have been overhauled, as well as the clients performance and memory usage should be much smoother. All the client options from the Premium Testing session have made it into 4.0.0. This is an insane amount of client features that have been long requested.

Note: Missing spots in the Battle Pass are not blank, and will be filled with rewards in a hotfix.

The release of the Trial 4 is finally upon us made by Lumpian himself. The cost is 240 trial tokens and will launch a true bullet hell fight, that we hope everyone will enjoy. The fight has 2 dungeons, It can be done in one. But if you are daring to face phalgomor all enraged, you shall find him in The Deathdream. With this addition, we have added a one time use pet, and a wizard skin. As well as Forgotten Zol Gem, and Dranbiel Garbs have been retooled and are mirroring the new LGs, Master of the House and Kiskiorab. View the balance doc below with all the changes.

After some tweaks with the loot tables, Phalgomor and his Derivatives are now able to drop his signature loot: the Rift. There are 3 different types of Rift keys that can be looted. Each with its own rarity depending on and the level to which he is aggravated. The different tiers will correspond to which dungeon types it can open too. They require 20 stars to use, and can only be activated in your Guild Hall. (You may also use your vault, if don't have a guild.)

After much feedback regarding the minion phases in the fight  We have gone ahead and reworked them for you. Minor tweaks in other phases as well, get ready for lava madness! Lastly, we slightly increased the droprate for Helldom and removed The Atium from the shard pool and it will drop here with the rework.

A new LG consumable has been added into the mix. Fallen Longhorn, is more of a defensive focused consumable and will be dropping from Merganus in the Fallen Light Raid.

We have gone ahead and buffed Helldom Shell, see the balance doc below with all the changes. (Suggestion: Shad and Shmitty)

Overall, we want to encourage players to try out different builds by creating more room in node creation but also in nerfing the overall damage output by a little bit. See the balance doc below with all the changes and adjustments.

We have gone ahead and reworked quivers to provide different options and add more variety of quiver uses in the game. See the Balance doc below with all the changes.

We have gone ahead and reworked all lances as well, to not only provide different playstyles but as well as properly organizing the dps. See the Balance doc below with all the changes.

Hey, this patch is being done a little bit before Challenge League starts off. The main pieces are focused around the removal of items from bloated shards, and reworking Aspects. Ar Spell has also seen buffs. Our main idea was to bring out more farmable items into the game and 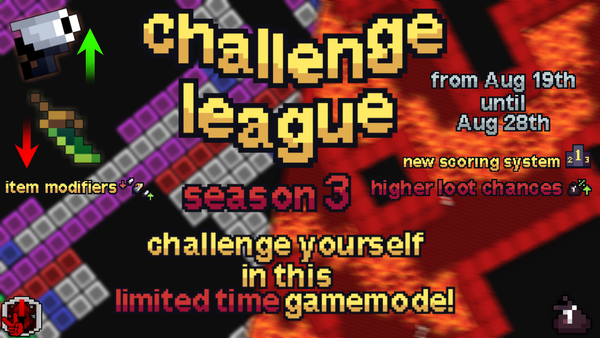 Hey, welcome to Season 3 of Valor’s Challenge League! If you have never played Valor’s Challenge League before, here’s a short explanation: Challenge Leagues are short-term custom Valor servers (typically lasting anywhere from 1 to 3 weeks), where all players start from scratch and compete against each
Hi all, as Summer continues, we have some information about ongoing and upcoming events and competitions. The hotfix 3.9.5 should be out soon or shortly after this article, so make sure to check out the #updates channel in the Discord. 4.0.0 will be closer to the